I woke up this morning, after a day of fighting off the stomach flu, to snow-covered ground. I dizzily made a slow trek to Small World Coffee for my first food in over 30 hours, and have been here ever since. A hot chocolate and a plain croissant and a couple of endless hours of listening to people’s pithy conversations while I distractedly write my thesis. A couple of the hockey team boys are sitting across from me at one of the teeny tiny tables — if you’ve ever been to Small World, you know they’re about big enough to fit a laptop and a plate — drinking cappuccinos, and for some reason that makes me giggle though, I suppose, everyone has the right to drink a cappuccino. Two older middle-aged women are next to me, complaining about how their last dinner party dragged on too late, how some other woman has the same job title though she doesn’t deserve it (though she has a lot of past work experience), and saying how the only things they can cook are chili and meatballs (ham is a Dean and Deluca thing). A couple little toddlers are teetering around the cramped spaces between the tables, and in the background you can hear the one barista banging out used grounds as he struggles to keep up with the line. I’m not sure why I’ve stayed so long, though it might simply be that I’m afraid I’ll pass out if I try standing up.

Since the semester ended, I’ve been doing a lot of sitting. And thinking about the future more than occasionally. Right now it mostly consists of future travels as I’m generally trying to avoid thinking about the real life. I have trip to England coming up to see my boyfriend — the same boyfriend who recently received these almond cacao nib biscotti in the mail, about two weeks later and probably stale (though he won’t admit it), and who has been insisting that I go see a doctor all day, yes apparently I have only one — and then plans are in the abstract works for the summer. For some reason, I’m struck with the belief that the world will end in August, or maybe just that a new life will start and I better have done everything, and gone everywhere, I wanted to in this old life before the new one starts.

On the subject of the cookies. I packed half of them up in a box, and put the rest of them out at the end of a little neighborhood cocktail party the night before winter break ended. They’re studded with a delightful little chocolately crunch, without the sweetness of chocolate chips; twice baked (obviously); delicately flavored with both almond extract and chopped almonds; and so, so easy, it makes me wonder why people are so impressed by homemade biscotti. If only they knew, there would be so much less hate for the cookie which generally grows stale in the glass jar at your neighborhood coffee shop. 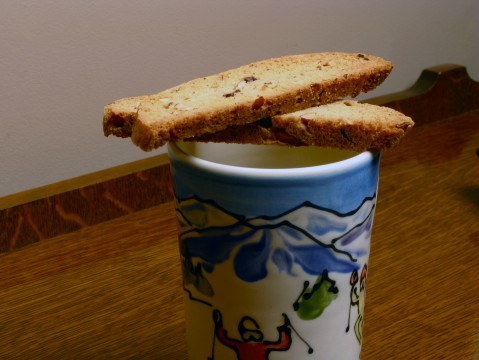 I followed this Smitten Kitchen recipe structurally, but got a bit lost in the flavorings, as you can probably tell.