A bowl of fresh linguine

It seems like just yesterday that I was standing in the kitchen, drinking red wine, with my camera in the other hand, documenting my little brother making fresh linguine using the pasta machine. I was called into the kitchen initially to knead the dough, but I ended up just photographing. And then eating, a bowl of pillowy curls of pasta, glossy from a coating of homemade pesto. We used the mortar and pestle I gave him for his birthday for the first time, ending up with a somewhat rustic pesto and a smattering of overflow garlic and oil on the countertop. The final plating was impressive, even more so because my brother is only sixteen and is more at home making pasta than, I’d venture, almost any adult.

Coming back to school, I miss the food and the kitchen more than anything. I know I complain about this a lot, and my pickiness likely doesn’t gain a lot of sympathy — especially when I run off on a rant that the reason I don’t eat vegetables at school is because they’re just not California vegetables — but there it is. We’re in the midst of reading week and finals, the cafés and libraries are packed, and I’m craving some good downtime standing by the kitchen counter.

I’m going to go ahead and say, I don’t have much knowledge about making pasta (perhaps I should solicit a guest post from my brother) but it seems to me that a lot of it is about touch and feel. So start with a basic pasta dough, and there are a variety of pasta cutters and pasta machines out there to urge on your creativity. Our household now has quite a few interesting contraptions (a ravioli-cutting rolling pin, a hand-held spaghetti cutter) for shaping pasta. 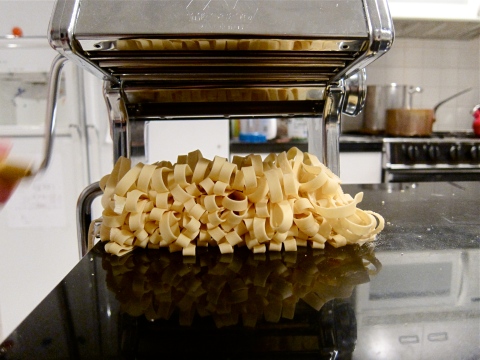 § One Response to A bowl of fresh linguine

You are currently reading A bowl of fresh linguine at Soufflé Days.