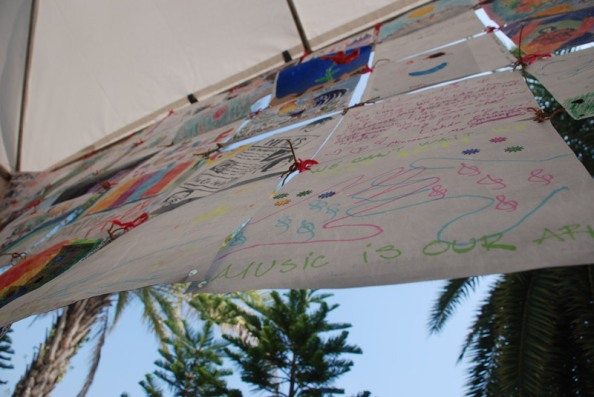 I have never been anywhere like this before. When I look out the window, I see thatched awnings, open-faced stores where people sit outside in half circles, talking to each other late into the night, and vendors selling fresh papaya, meats roasting on open grills. The city is a strange mix of the old and the new. People remark that it has changed so much in the past two years: the smog has rolled in and permeates the streets and cars weave between more traditional methods of transportation, crowding streets that were once almost devoid of cars. But for me it is all new and I soak it in with wide-eyed innocence.

As we step outside into the hot smog, we clamber into a tuk-tuk, a rickety contraption that looks like the back half of a pick-up truck only powered in the front by a motorcycle engine. We ride by the most recent addition to the city, a statue pointing to Thailand along the riverside, which holds hosts to tents and food vendors. For a mere 30 000 kip (the equivalent of about $3) we go the distance to the Don Chan Palace, which was built by the Chinese in 2004, complete with shiny surfaces and gaudy lobby decoration, all quickly deteriorating. The entrance to the hotel is marked by the presence of guards and security machines —much like the entrance of an airport — and we have to walk though a metal detector to gain access to the hotel shops in the lobby selling big, flashy necklaces, almost certainly fake, and shawls of every shade and color.

Outside the hotel, Lisa has set up a stationary tuk-tuk covered with the Tapestry of Hope: Weaving Together a Bomb-Free Future. Lisa, who recently moved to Vientiane, wears comfortable sandals with sturdy soles as she walks everywhere and has her hair cut short in a simple, carefree way. She stands in front of the exhibit, which consists of square pieces of postal paper tied together at the four corners with string, illustrated by people living in the Twin Cities and the San Francisco Bay Area among other places our organization, Legacies of War, has held workshops in the United States. Beside the tuk-tuk is a counter set up for Vientiane contributions to the exhibit; passersby can stop and paint or draw their own pieces, which are immediately tied to the existing tapestry. The morning started out slow with a slight hitch when the Lao coffee —essentially espresso sweetened with condensed milk — arrived with a splash, literally. But soon, people started stopping by and one by one, the paint colors were opened and put to use. The Lao Prime Minister arrived then, taking most of us by surprise, and I shook his hand before quite realizing who he was.

As the day moved on, I sampled fried coconut cakes, stuff with corn kernels, and marveled at the wide variety of fruits for sale on the sidewalks as it is fruit season in Laos at the moment. The evening passed at a reception in the Cultural Hall and an exhibit by Lao artists of their representations of the Lao countryside, which is contaminated with active cluster bombs which can be set off at any given moment. An extended nightcap on the top floor of a bar along the riverside, sitting at the open balcony looking out at the lights of Thailand across the water, and then we were back on the streets, wandering in search of my guest house, across the street from the Inpeng Temple.

You are currently reading Beginnings of Vientiane at Soufflé Days.