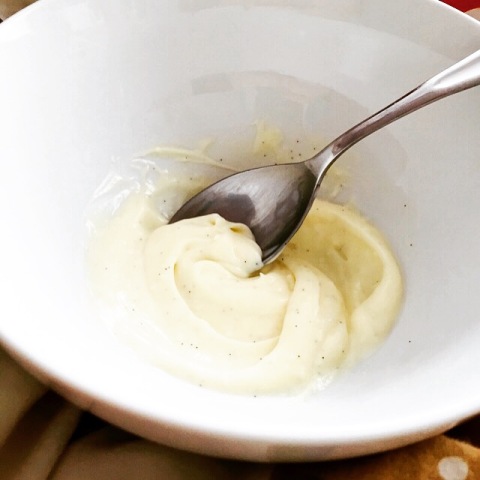 I woke up from a Valentine’s Day induced slumber—read cheese fondue, crusty bread, roasted potatoes, lots of wine, and finished with chocolate pot de crème with fresh whipped cream—to another blizzard. It’s our second blizzard of the season, tempered only by a couple of winter storms, making for the snowiest month Boston has experienced, ever. We’re making history.

In the midst of all of the snow days (I count six in the span of three weeks) and time spent scurrying from building to building lest I spend more than ten minutes outside, I’ve make a lot of food. Not the most practical of foods though, for you know, the end of the world in one white, snowy combustion.

No, I’m making things like this vanilla bean pudding. Things that I can eat for breakfast while I sit in bed under the covers and watch the snow fall out my window.

Vanilla Bean Pudding
Adapted from the Smitten Kitchen
I made a couple of changes to the recipe, namely increasing the vanilla flavor, scaling down the salt, and using cream instead of milk. Oh, and ensuring a great silky finish by adding the tablespoon of butter as the final flourish.

Split the vanilla bean down the middle lengthwise and scrape the seeds into a medium bowl. Add the sugar, cornstarch, and salt and stir to combine. Gradually pour in the milk, whisking so that lumps don’t form. Then, whisk in the egg.

In a medium saucepan, bring the cream to a boil with the de-seeded vanilla bean for extra flavor. Gradually pour the boiling cream into the bowl with the egg mixture, again whisking continuously so that lumps don’t form. Once it has a smooth consistency, pour the mixture back into the saucepan and heat, whisking constantly, until it begins to thicken and leaves a thin coat on your whisk. Remove the whole vanilla bean.

Transfer your pudding to a clean bowl, and whisk in the tablespoon of butter until it is completely melted. Cover in plastic wrap and chill for 2+ hours. The chill time will help your pudding set up so that it keeps it’s shape (mostly) when you take a spoon to it.

And if you’re me, this makes a great breakfast in bed, kind of like a bowl of yogurt you know? If you’re uh, not me, feel free to eat it for dessert.

You are currently reading Vanilla Bean Pudding at Soufflé Days.