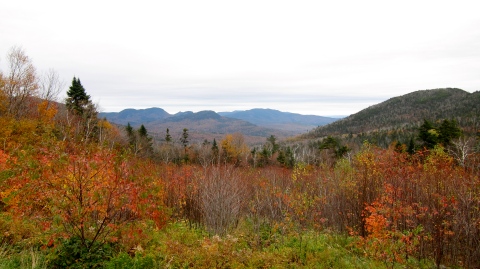 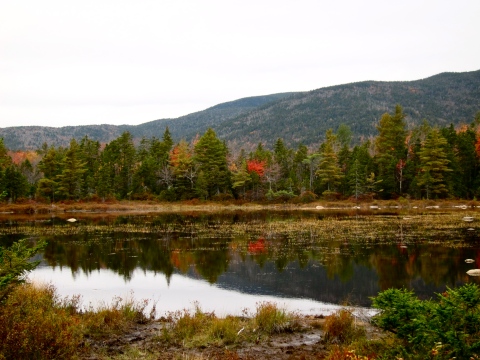 Last weekend, we drove north to New Hampshire. Or rather, Dan drove us north, since I still can’t drive. The idea for the weekend originated with my registering for the Applefest Half Marathon in Hollis, a course of rolling hills through the fall foliage with the promise of apple crisp at the finish line, and baskets of apples and pies as prizes if I did well enough. Luckily we were not disappointed — I say we because I got cornered into promising to make several apple pies if I didn’t manage to win one at the race. The course was tough, much hillier than I had pictured (word is, my website reading abilities aren’t the greatest as the rolling hills were clearly indicated when I signed up to run), and I never felt like I settled into a real rhythm. But I came in just two minutes behind my half marathon PR and was pretty pleased that I had finally gotten back into training and racing, even if the actual race had moments that could have gone better. And the prize, a towering basket of apples, for winning my age group, was a pretty nice cherry on top.

From there, the weekend was mostly eating. A first post-race stop at a nearby apple orchard where a wood-fired pizza cart had set up on the lawn for lunch included a pizza topped with spiced pumpkin sauce and bacon, another with peppers, onions, and spinach, blistered black crust and the squeals of children in the rows of pumpkins by the general store. Then, we drove north to Concord, where we stopped at the Gould Hill Farm in Contoocook. A delightful orchard nestled in the rolling hills, now flaming orange and red, specked like evergreen, we ate hot fluffy cider donuts, drank apple cider, and picked a peck full of Empires, Macouns, and Hampshires. We also played catch with an apple and ate a few, but we don’t tell everyone that.

We drove two more hours north, through the lakes region, to North Conway, where we stayed the night at the Isaac Merrill House (Thanks, Mom!), a sweet, white house, dating back to 1773, with creaky floors and fluffy blueberry pancakes and French toast for breakfast. We spent a lot of the trip in the car, expressly to see the fall foliage, which draws so many people north every year. Sunday morning, we drove through the national forest, stopping every so often, emerging into the chill to take in the river winding down next to the road, the mountains streaked with color, vibrant orange hitting the blue backdrop of the sky. As we approached Boston, the rain started to come down, at first a light mist but increasingly heavy, and we stopped again in Concord, this time to discover that most bakeries and restaurants are closed on Sunday, and settled for a veggie pizza, that was actually quite good, as pizza tends to be.

I’ll spend the next week coming up with ways to use all of the apples we brought home; it started with an apple crisp, topped with vanilla ice cream last night, which we’ll continue to eat for breakfast these work-day mornings.

You are currently reading New Hampshire getaway at Soufflé Days.