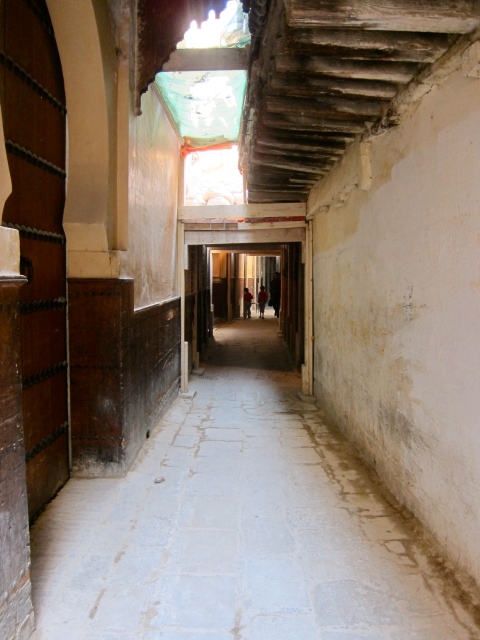 We had a couple of one-night stays when traveling from place to place in Morocco, despite our desire to pick a few places and explore them well instead of trying to maximize the number of cities and towns we hit. The day of our initial arrival in Morocco, we spent a night in Casablanca, which significant prior reading advised skipping altogether as the city itself is “nothing special” to the Western traveler.

I was actually quite glad we stayed. While the city was certainly larger and busier than the ones to follow, we learned quickly that the best way to cross a large boulevard is to dart out in front of moving vehicles. In the morning we walked from our hotel to the Hassan II Mosque, attempting to hug the waterfront along the way, a path that was thwarted by the police officer who stopped us, concerned that we might not want to be walking into the industrial fishing port. Once on our way again, the mosque was easy to discern amongst the other buildings in the area. The intricate, detailed tiling and high arches were enough to keep us entertained for quite awhile, even without the hour-and-a-half tour of the inside. What struck me most about Casablanca was the old medina, which again we had read was barely worth a visit. The medina in Casablanca is very much still in use, a huddle of alleyways packed with people selling produce – bundles of herbs and fresh watermelons – fried breads and other bites to eat. We wandered through virtually unnoticed as everyone went about their everyday lives. Keeping a eye on the paths we took, we eventually spilled out through a gate at the other side of the medina, almost exactly where we were aiming. Again, busier, dirtier, (I think my walk down one alley must have looked much like I was playing hopscotch) but I walked away from Morocco a week later feeling that if there was one place I would have liked to linger and chat about “daily life,” it would have been here. 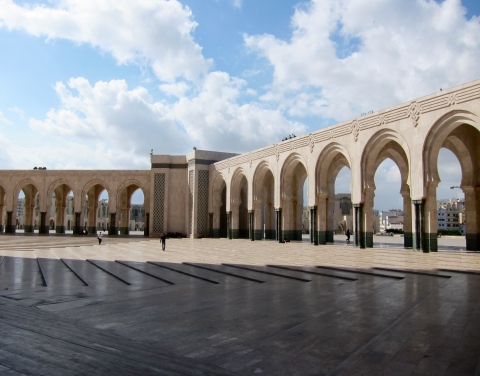 One day stop number two! We arrived in Fes after a 5-hour bus ride from Chef chaouen, expecting a 7 hour train to Marrakech the next afternoon. It was the first place we encountered the young boys aggressively offering directions, and I owe part of our negative experience here to my getting easily upset over being followed and harassed by 13-year-olds. Still some good things did come out of our 16 hours in Fes, mostly on the food front. We had our best (and most expensive) tagine in a restaurant recommended by our riad – a selection of small-bowled Moroccan salads with bread, a chicken tagine with lemon and a kefta (lamb) with spicy tomato stew and egg, followed by thin sheets of deep fried pastry layered with condensed milk cream and a huge plate of sugar cookies and coconut balls that I just had to pack up for later. Below you can see the extensive breakfast spread put out for us at the riad the next morning with mint tea and coffee. In addition to the standard bread circles and the cut loaf of sweet anise bread, we were offered a plate of warm mille trous, a soft, spongy pancake that literally translates to “a thousand holes.”

§ 3 Responses to Morocco: One day stops

You are currently reading Morocco: One day stops at Soufflé Days.