As I’m busy getting back into the swing of things on campus — accepting that daily reading is a part of real life, reconvincing myself that yoga is good for the soul (and my arm muscles), and coming to the harsh realization that coffee not naptime is the cure to exhaustion — I realize I’ve let the blog fall to the wayside a bit. I came back from a brutal spinning session this evening, promptly got in bed, and then remembered that it’s no longer summer, when an 8 p.m. bedtime in acceptable.

Still the past week and a half have felt a bit like summer camp — late afternoon runs past the Battlefield, walks with friends on the path by the lake, meals eaten at picnic tables, and unlimited beer for all (though I guess our summer camp might be a bit more risqué than most). There have been bottles of sweet peach champagne (though the snob in me would insist on calling it sparkling wine), lots of chocolate chip cookies from our clubhouse, neon baseball caps, a little concert crowd shoving, and quite a bit of dancing, though some might say it’s just us bouncing up and down endlessly. I started the first day of classes with cuts and blisters everywhere, barely able to keep my eyes open, but so excited for the adventures to come. It’s that week when class discussions are still enthralling, the honeymoon period before stress and panic set in, when we’re finally realizing we’re seniors. This is it, the last year, the beginning of the end.

The finale is a bit different for me given the newness of this year. The first year of living in the upper class slums, where cockroaches are apparently a real thing and not just the stars of my nightmares. The first year of college without the best friend who’s been at my side since day one, when we were randomly placed in single rooms on the same hallway freshman year. The first year of really being a part of the Class of 2013, putting everything that was the Class of 2012 firmly in the past. It’s been bittersweet so far, but the weekend has done a lot to erase the nerves and tears. 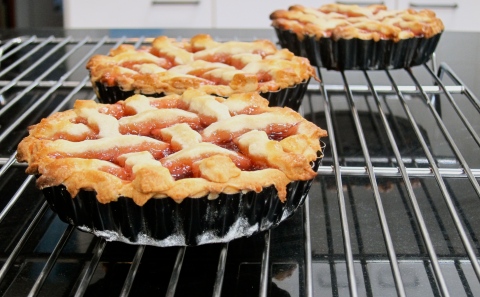 These tarts bring a smile whenever I think back to them, and they could not be simpler to make. Just a bit of tart dough, rolled out and cut in strips, some quality jam (I used a jar of strawberry jam we picked up on our family trip to The Apple Farm), and a little bit of patience for the weaving.

You are currently reading Strawberry Jam Tarts at Soufflé Days.