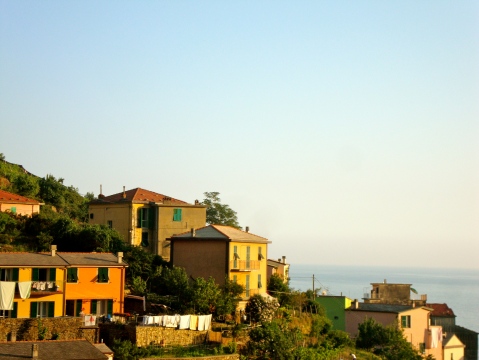 I’m sitting on a regional train heading up the west coast of Italy and kicking myself because I don’t know why I ever thought eight hours spent on a train would be a good idea. And then two hours spent in the train station. And then another one and a half on a bus to Alba. The little boy sitting diagonal from me has long since finished his panino and exhausted the possibilities of playing with the kids in the compartment next to us. The man across from me has removed himself for about ten cigarette breaks since our departure in Formia. My train ticket has been checked five times. And still there’s two hours to go.

I have tried watching the Italian countryside out the window, fields upon fields of sunflowers, the Mediterranean Sea glistening on the other side, children’s clothes and dishcloths hanging out the windows to dry. I’m starving, and already missing the home cooking I had gotten used to, but the rickety cart that bangs down the aisle selling panini and chocolate bars has little appeal.

About an hour ago, we passed the five towns of Cinque Terre, where I spent a weekend at the beginning of July. It was a lazy weekend that somehow managed to jam-pack clubbing in Milano, swimming, sun-bathing and uphill hiking and eating a few too many gelatos and breadcrumb stuffed mussels from high perches overlooking the sea. Now from the train window, I see the rocky shore where we stopped for our first swim in Corniglia and the steep set of stairs that brings you from the Manarola train station to the center of town.

As we arrive in Genova, many of the passengers disembark and I finally have space to put my feet up. Only an hour to go. I start thinking about getting on a plane and going home. It wouldn’t take much longer than this train trip. The little boy is passed out with his mouth and eyes half-open, but I’m pretty sure he’s asleep. His father sitting next to me is reading some inane book in English, very slowly. I’m listening to Colder Weather, and while I’m pretty sure it’s warmer here than it is anywhere else, it seems to fairly accurately reflect this journey. Except instead of road-side diners, I’m seeing a lot of beach town sandwich joints called bars. That is, when I am not seeing someone’s clean underwear hanging out the window. Now both parents are passed out too and I’m trapped in this compartment, right as I was considering tracking down that pitiful food cart and trying to score a Kinder bar.

The famous gelato shop in Gaeta had Kinder flavored gelato. And Snickers gelato, only they called it Mr. Nico. And Nutella of course, only for some strange reason that was one of the flavors they rotated out over the course of the week. Damn, the cart just passed and the man didn’t even look up so I could ask it to stop. Though, it might take me a little while to figure out how to ask that. Maybe I’ll be ready by the next time it passes by.

You are currently reading Gypsy Soul at Soufflé Days.