A weekend in Lyon 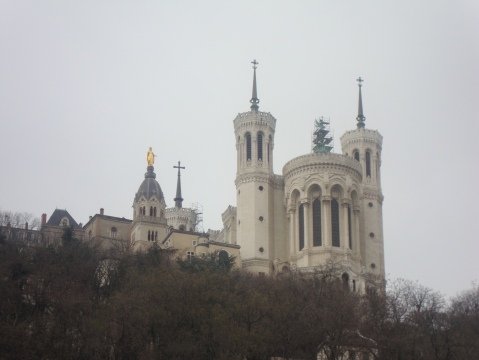 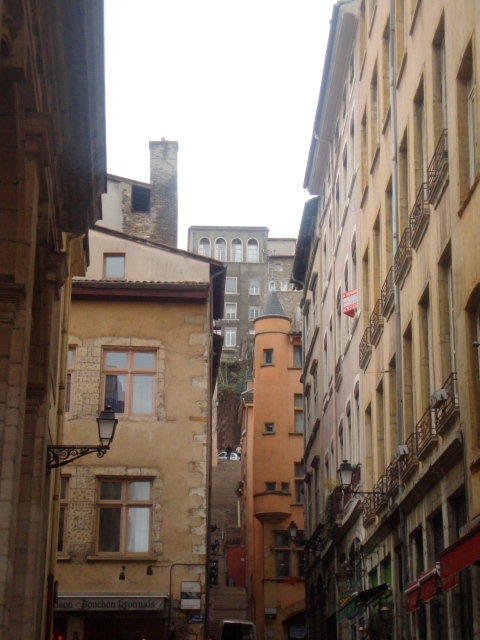 I arrived in Lyon on the Friday of the fête des lumières in a sleep induced haze brought on from a sleepless night and three early morning hours of dealing with the French bureaucracy getting my visa validated, just days before I leave France for good. I took one look at a metro map which included the entire city’s bus system as well and decided there was no way I could deal with it right then. My cab driver was nowhere near as chatty as I am used to, though it struck me that he was the first French cab driver I have ever seen; he was Lyon-born, while most cab drivers in Paris are recent immigrants, usually from North Africa. My next cab driver was another Lyon-native and I lost track of time — and our route — talking with him about shark hunting in Tahiti.

Once I had checked into my hotel, the situation called for very extended nap, to be woken only by my friend for dinner at Brasserie des Ecoles, a classic brasserie with painted windows for the holidays, where I had a pleasant salade chèvre chaud, which I have been craving and was long overdue. A brief walk around La Croix Rousse, a pint of beer at Sullivans Irish Pub, generous servings of fries with dipping sauces (the mayo given wasn’t a choice) at a random kebab shop and a long walk to Vieux Lyon, I found myself waiting out the night at a late-night bar called the Melting Pub. It would not have been my first choice of hangouts and we quickly made our way to the back, when I staked out a stool—as if on display, one of the guys commented. The bar was one of those places for the people who just can’t let go of the night and for the really tired people who just want to the opening of the metro to come faster. I quickly became part of the second group: after awhile my eyes started to burn from the smoke — the bar allows smoking indoors — and an hour in, I was fighting the urge to itch at my eyes.

But as much as I complain, I love being awake for those early hours of the morning, as the night people and the morning people overlap, men order their last beers at the bar and girls in heels light up their last cigarettes on the walk home while the merchants start to set up their displays, brioches and tarts begin to appear in the storefront windows, but it is still hours before the lines start to form out the door of the famous boulangeries. One such boulangerie in Lyon is the Boulangerie du Palais, where huge lines form for their brioche aux pralines; Lyon has several famous regional candies, one of them being pink pralines which are baked into sweet breads, tarts and croquants. I managed to get my hands on a brioche my last morning in Lyon and once having sufficiently tasted it, gave it to the homeless man I had walked past earlier, who was shivering in a doorstep lighting a cigarette, a pair of ski goggles raised on his head and a rainbow scarf around his neck. When I said “brioche aux pralines” his face light up like a little kid’s and his smile made me forget everything I knew how to say in French.

I had a delicious, fruit and nut packed praline croquant and also sampled other Lyonnais candies: les quenelles, a hazelnut-praline filling covered in a thin layer of white chocolate, and les coussins, a chocolate mousse perfumed with curacao enrobed in sunny yellow or green almond paste and sugar coating.
A trip to the Marché de Noel by the Perrache train station found tartiflette, the traditional Lyonnais potato gratin, slowly cooked with onions, thinly sliced bacon (lardons) and lots of cheese. Stopped to chat with the Quebecois lady selling maple products, and her husband making pancakes with real maple syrup on the crepe skillet, but was disappointed that she didn’t carry my favorite maple sugars, as they are too difficult to transport.

But believe it or not, my days weren’t just filled with eating. We wandered the Parc de la Tete d’Or at night, walking the paths by the lake lined by pots of fire and warming our hands around big balls of fire which shot out sparks, which magically seemed to go out immediately upon hitting the dry leaves on the ground. I took shelter inside at the Musée des Beaux-Arts, where I saw the Louis Cretey-Un Visionnaire entre Lyon et Rome exhibit. I headed up to la Cathédrale Saint Jean at the Fourvière before most of the tourists were out in the morning to take in the city from above. But as the cafes were all closed at the top of the hill and it was clilly out, I headed back down to Bar de la Ficelle for my morning café crème.

§ One Response to A weekend in Lyon

You are currently reading A weekend in Lyon at Soufflé Days.